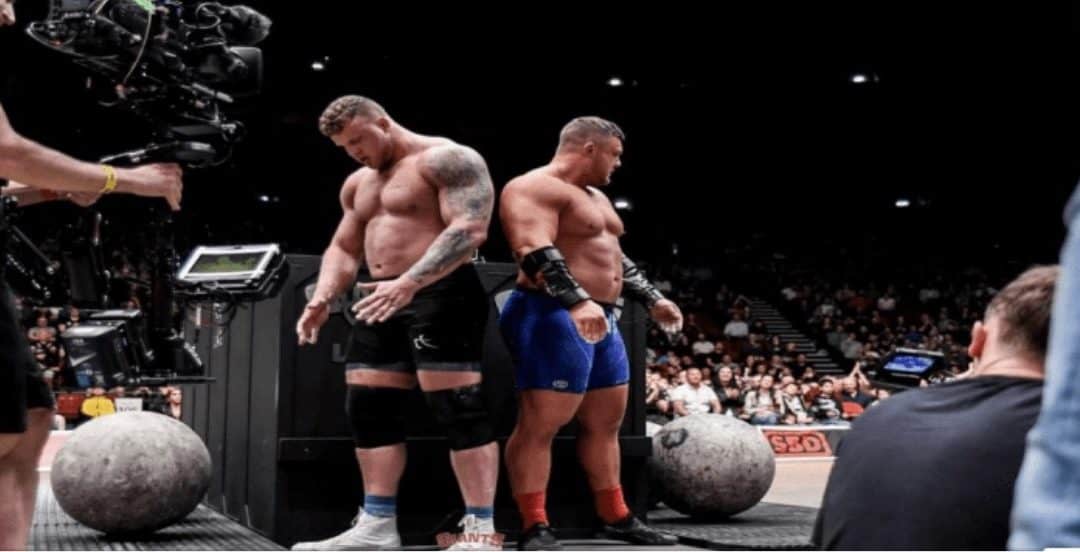 Athlete Tom Stoltman’s journey into strongman was one which began in previous years by watching his older brother Luke Stoltman training in the gym. An inspiration which his older brother reminds him of as both enjoy competitive humour around the feats of human strength both share as both compete on the strongman event circuit worldwide.

In the 19th century, the term strongman referred to an exhibitor of strength or similar circus performers who performed feats of strength. More recent times defined as strength athletics or strength athlete, aka strongman competitions, have grown in popularity over the last few years with increased broadcasting rights, sponsorship and online audiences. These competitions are now composed of a variety of events in which competitors have to move the highest weights possible, the winner being the one having the highest tally across all events.

In short raw functional strength through exercises such as lifting atlas stones, deadlifting massive amounts of weight off the floor, pulling trains, towing an eighteen wheel truck behind them and more. The most famous competitions of this type are the World’s Strongest Man, the Arnold Strongman Classic, the Strongman Champions League and the Giants Live tour, however many countries hold national-level competitions with competitors aspiring to follow in the footsteps of well know competitors such as American Brian Shaw, Iceland’s Hafthor Julius Bjornsson and the UK’s Eddie Hall.

Tom (25) from Invergordon Scotland at 6ft 9 and 26 stone has not looked back since starting out in the gym’s of the north of Scotland. He says his frame makes the Atlas Stones his perfect event. He’s not far wrong after competing recently in the Worlds Ultimate Strong Man October 25th at the Meydan Grandstand Dubai where Tom achieved the quickest recorded atlas stone run of all time completing the ten stone run in a incredible 40 seconds, he also placed 3rd overall in the competition and brother Luke placed 2nd, currently both rank in the top ten strongest athlete’s in the world the first ever for brothers simultaneously.

Tom also won Scotland’s strongman competition in 2019. He is 2x Scotland’s strongest man, placed 3rd in Britains strongest man 2019, placed 4th in Europe’s strongest man and placed 5th in the worlds strongest man 2019. The Giants live series tour which qualifies strongmen to compete in the annual Worlds Strongest Man starts off again in January with the Britain’s Strongest man contest at the FlyDSA Arena, Sheffield January 18th 2020 the competitions are red hot with sell out atmosphere’s. The worlds strongest man event this year takes place in Florida, USA in June. Statistically the strongman sports market was one of the fastest growing global sports in 2018/19. Channel 5 UK followed the events through 2019 and will again broadcast over the Christmas period where viewers can tune in to witness the incredible event atmosphere, jaw dropping acts of human strength and get to know the commitment and sacrifice required to survive in this crazy sport.

Being a full-time athlete sounds glamorous and may look exactly that from the outside looking in, however if you were to join the journey and see the daily routine of training most hours of the day and the nutritional costs it can be very tough, it’s a lifesyle, you have to live the life if you are serious about professional sport. Funding competition participation for athletes even in the professional ranks can be difficult with costs for equipment, travel, hotels accomodation and more. Teamwork is very important to Tom’s aspirations and speaking with Tom recently he went on to say ” i have to credit my partner Sinead for her daily support it’s difficult when i’m away from family training or competing, i work also in between competitions presenting Strongman seminars and i am working on a few projects in 2020 in terms of community work where i can give back my experiences so far to the sport which has helped me so much. My sponsors Pro-Form Nutrition , SBD Apparel, MiraFit, Kinda Fit Kinda Fat, Jab Apparel and Strikeforce Security i always require more help and my team around me inspire me to achieve success not only for myself however for them to”

The Strongman sport is always working hard to increase participation levels to benefit the next generation, participation is monitored by governing bodies in which what sports are then allocated sufficient funding to grow and perform in elite level competition.

Links to some of the local UK strength gyms can be found here: