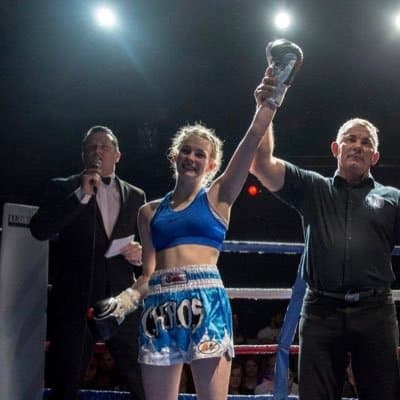 At the age of 11 years old all it took was a flyer through the door for current pro athlete Samm-Jo Luxton to kick off her Muay Thai journey.

At currently 19 years of age Sammy-Jo Luxton now a professional Muay Thai athlete has likley seen less social time than her friends however may have traveled to a few more destinations around the globe than your average holiday maker, the reason?, sacrifice and a love for the sport of Muay Thai, from 11 years old all it took was a flyer through the door for a young kid who loved sports and wanted to try something different.

Now at 19 years of age and 55 amatuer fights later which only consisted of 4 losses and 1 draw and scooped the talented Devon athlete 16 titles in the process along with being the first ever female to win the WBC under 18 title Luxton is going from strength to strength. Her start to her junior lightweight pro career is now 4 wins and 0 losses.

It was not all good news all of the time, Luxton will tell you there have been challenges, there have been more highs than lows and one low was April 2018 when fighting in Thailand she ended up breaking her foot badly and was taken to hospital where x-rays, treatment and given medication personally cost her £500 as her small sponsors didnt have any spare funding. This however meant unwanted time out the ring and a chance to reflect.  She quickly recovered got back training and was sheduled to fight in December 2018 however 3 opponents pulled out of her comeback fight which meant she was competitively inactive the majority of 2018 which meant sponsorship was difficult because to outside world she was not active enough.

Since the turn of the year its been more positive, despite the setbacks Luxton continued to train in the gym sticking to meal plans and staying ready for her next bout, she has since aquired sponsorship and nutritional help and is welcoming additional sponsors to get on board as her fight shedule this year is going to be super busy and requires a lot of expense. Sammy-Jo hopes in 2019 that sponsors, advertising businesses or community funding etc can help her with the process and allow her to drop some of her hours at her full time job so she can fully focus on her fighting career a career in which she is confident of winning professional titles at the highest level. If her background is anything to go by then why not?.

The calendar of events are as follows so far this year for the athlete, she is fighting February 9th to try and secure a place in the GB squad for the IFMA world championships, then fighting again on February 23rd against a world gold medailist and back out April which will hopefully be for the Southern Area title. Ideally Luxton would like to be in the UK top 3 in her weight class by the end of 2019.

The Luxton journey resides in a small town called North Tawton, Devon, England where the fighters base camp is the Team Chaos Fitness Centre you will find has a number of male and female Muay Thai athletes dedicated to the sport led by the hard working coaching staff the centre has to offer. Sammy-Jo also pays huge grattitude to her parents who she says if it was not for them sacrificing their own time and balancing their work load along with trips from event to event it all would be not possible.

On July 31st 2017 the IOC (International Olympic Committee) agreed a deal with Los Angeles to host the 2028 Summer Olympics, making Paris the host of the 2024 Summer Olympics. Muay Thai has recieved provisional recognition as Olympic sport by the International Olympic Committee, Muay Thai will now be able to obtain IOC funding and take part in a number of programmes, including athlete development and anti-doping. At the end of their three-year provisional recognition period, they can apply to become part of the Olympic Games sports programme.

Muay Thai is an organisation with 135 national federations, around 60 are recognised by their national Olympic Committees and around 400,000 registered athletes.