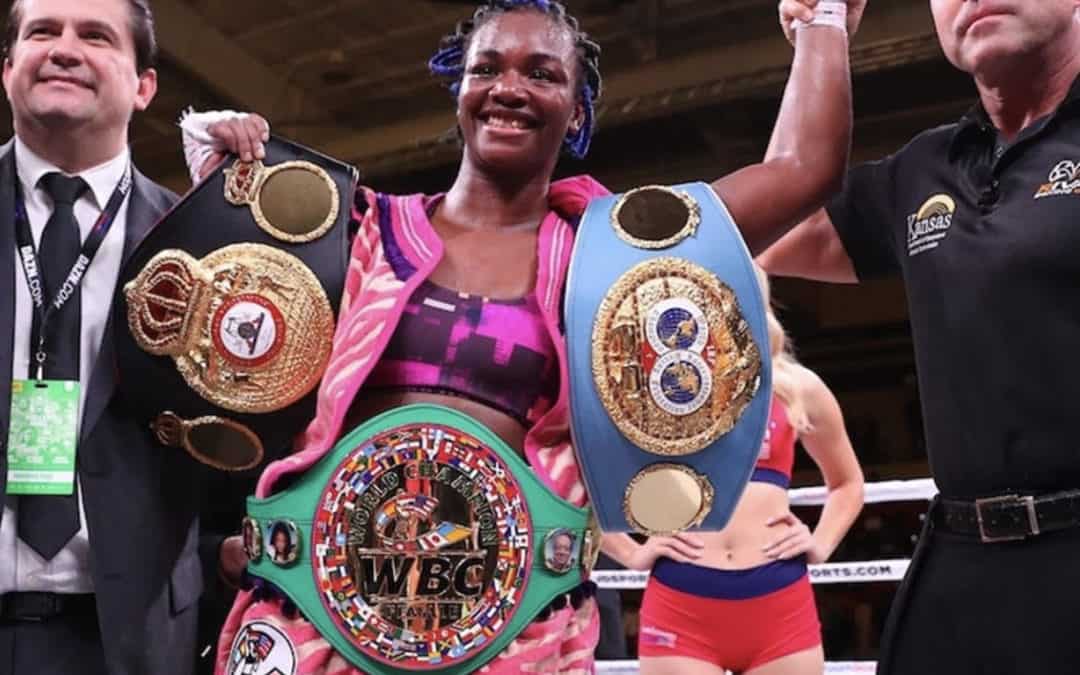 The event was promoted by Matchroom Boxing, Salita Promotions and Knockout Night Boxing live via DAZN USA and Sky Sports UK.All three judges scored each of the 10 rounds for Shields (23) who is now 7-0, and 2 knockouts. Hannah Rankin (28) slips to 5-3 and 1 knockout.

According to DAZN’s unofficial punch stats, Shields landed 136-of-457 overall punches, 61 more than Rankin (75-of-385). Claressa Shields successfully defended her IBF and WBA middleweight titles. She also captured the vacant version of the WBC women’s 160-pound championship.Shields was the busier and more accurate fighter than Rankin on her way to winning a 10-round unanimous decision on the Heavyweight Jarrell Miller-Bogdan Dinu undercard, this was a fight which had built momentum attracting more than just the boxing hardcore, showing further evidence how female Boxing is making great strides worldwide.

There was anticipation from the crowd as the bell sounded for the first round, the fans were looking forward to this one, Shields quickly looked to cement her decorated boxing background with a fast start moving well and finding her timing to snap some clean shots to the body of Rankin, Rankin had come to fight and would try to get her own shots off early.

In the second round Shields caught Rankin with an overhand right to the side of her head, Rankin took it well and seemed to recover by the start of the third.

Going into the third the fight was more even with Rankin finding her timing and Shields displaying some great footwork both boxers were putting on a show, Shields would just edge this round with punch accuracy.A counter right hand in the fourth by Shields knocked Rankin off balance, as Shields was starting to plant her feet, Rankin, however, would continue to work away looking for openings to catch Shields and did not look overawed by her opponent. This was a good fight.

On to the fifth, Shields landed an overhand right to the head and followed with a left to the body with about 30 seconds to go, Ranking would struggle to find any punches of note in this round, Shields was dominating at the halfway stage.

A right hand again by Shields caught Rankin and made her retreat from the champion early in the sixth round.

Rankin had her most successful round in the seventh landing more punches on Shields but Shields would not be put off and would keep coming forward.

Claressa Shields displayed some quality combination work in the eighth round when she landed an assortment of heavy shots on Rankin, the Scottish fighter made the last two rounds competitive, but Shields continued to build on her lead which showed on all three judges scorecards with a unanimous decision.Prior to this bout the WBC had declared Germany’s Christina Hammer (23-0, 10 KOs) its champion in recess because she is temporarily unable to defend the WBC title while she recovers from an undisclosed illness.

Shields was supposed to meet Hammer, also the WBO champ, on Saturday night in what would have been a middleweight title unification fight. Hammer had withdrew from their scheduled bout shortly after it was announced late in September. Rankin is a former sparring partner of Christina Hammer.

Hannah Rankin had stepped in as a replacement for Hammer following on from her last unanimous decision defeat to Alicia Napolean when she challenged for the WBA super-middleweight title in what was only her seventh professional fight.

Shields claimed two world titles at super-middleweight in just her fourth fight before moving down to the lower division, Shields believes she is one of the best in her sport, alongside Ireland’s unified lightweight champion Katie Taylor.

After the fight Shields went on to say “I am above the average, I am the greatest woman of all time, no matter if they like it or not because there’s not a girl that can beat me,”
She also somewhat paid compliment to her opponent Hannah Rankin saying ”she has potential”
Allan McGoldrick / Twitter @AMCGUK