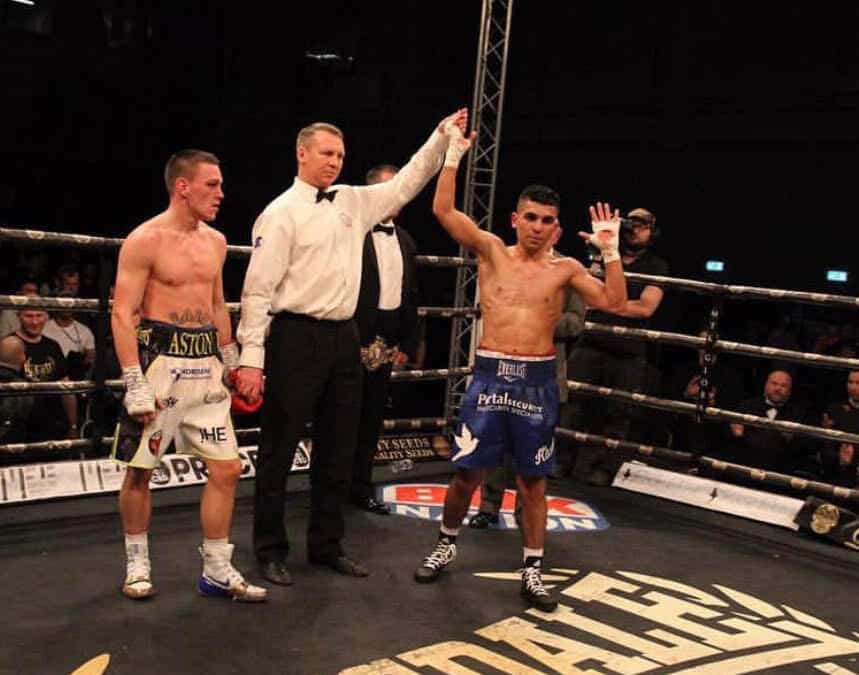 Scotland’s Kash Farooq was impressive with a near shutout performance en route to a unanimous decision win and first defence of his British bantamweight title in an all Scottish affair against the more experienced Iain “Baby Butch” Butcher.

The show which was televised on Boxnation UK and promoted by MTK Global as part of a partnership deal between the two was an impressive night once again in Glasgow. A stacked card with some real 50/50 fights which would delight the crowd at a packed Emirates Arena.

Pakistan-born Farooq, 22, previously won the belt in September when he stopped Jamie Wilson after just 73 seconds.

Fighting in his home city of Glasgow again, he continued his unbeaten professional record to 11- 0, 4 KO’s whilst Butcher slipped to 18-4, 5KO’s.

Farooq moved to Scotland with his family in 2002, is the first Scot to hold the title in 21 years. Bantamweight Commonwealth champion, Cyclone fighter Lee McGregor was ringside watching on with interest for what could be a potential clash down the line.

Elsewhere on the card…

Irish Super lightweight Tyrone McKenna (17-1-1, 6 KO’s) defeated Scotland’s Lewis Benson (10-2, 2 KO’s) by unanimous decision in what was a terrific scrap and one which could have gone either way, ringside fans believed the cards were closer, a rematch I’m sure would be welcome.

Super welterweight Scotlands  Kieran Smith is the new WBC International Silver Super welterweight champion (13-0, 6 KO’s) Smith ground out a hard fought 10 round victory over Latvian Evaldas Korsakas (9-6-2, 5 KOs) both boxers were down in this fight however Smithtook the contest on points!.

Korsakas was a last minute replacement due to Peter McDonagh pulling out.

Smith said after the fight “ I’m not too impressed with my performance, I can do better, he was a tough fighter, however, we got the win”.

There were also wins for Alex Dickson and Callen McAulay.