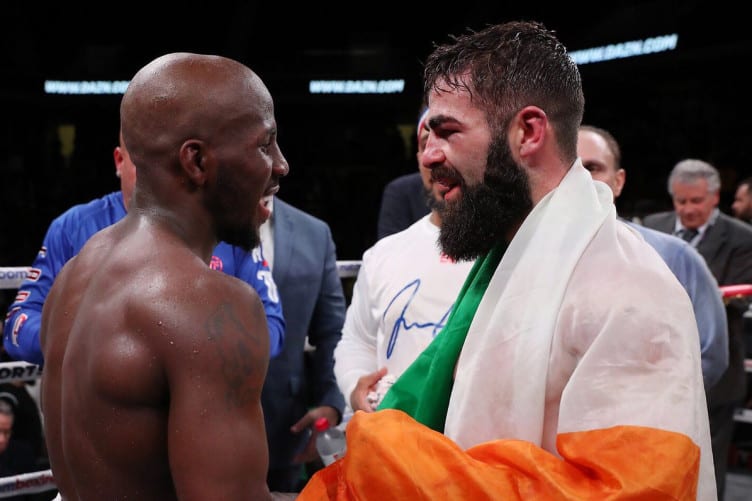 The scores may have made this bout look one sided however based on heart it was much closer, Carroll was certainly there to win.

The unbeaten southpaw challenger from Dublin Ireland backed up every bit of his pre fight trash talk in the early rounds of his U.S. debut and first career title fight forcing a frantic work rate, pushing Farmer back and averaging impressively more than 100 punches per round over the course of the contest.

Around the first quarter of the fight (round three) Farmer began to settle turning the tide somewhat and reeled in the hometown crowd working on the inside and scoring with uppercuts. Carroll did his best to keep pace, but for the first time in the fight was unable to time Farmer’s excellent defense.

Two-way action resumed in round four with Carroll regaining his bearings, throwing three to land one in his best effort to unsettle Farmer’s  defense. The strategy came at a price, as Carroll was beginning to punch himself out while Farmer showed no signs of slowing down.

Farmer drew excitement from his local fans in round five, landing a sharp right uppercut which dislodged the mouthpiece of Carroll. Time was called but didn’t at all change the direction in momentum as Farmer punched with far more conviction and accuracy.

Carroll not giving up still pushed to reclaim control of this fight at the start of the second half, clearly outworking Farmer however what little he was able to land not having any real effect by the looks of it.

On to round seven and Farmer would slice away with uppercuts and right hooks both landing on the inside, round eight was fought entirely at close range, both fighters trading shots not taking a step back mixing heart and skill.

Heading into the championship rounds, Carroll was forced to fight through fatigue as well as a worsening cut around his right eye. The Dubliner dug deep in round eleven scoring a terrific right hand to briefly slow down Farmer.

The champion also connected with a left hand and huge right hook that had Carroll in trouble to and a follow-up combination of punches prompted a rise from the crowd but Carroll managed to weather the storm.

The 12th and final round saw both fighters leave it all in the ring in this prizefighting sport giving all they had left with Farmer arguably still landing the far more effective punches, which throughout the twelve rounds would see him retain his IBF super featherweight title.

“I outboxed (Carroll) when I wanted, I outfought him when I wanted to,” Farmer said after the contest, nobody likes to get hit, but I had to see where his heart was at.”

Elsewhere on the card,

Taylor has been forced to go to the scorecards in five of her previous six starts, prompting some to believe she lacks punching power at the championship level. That issue was put to rest on Friday with less than a minute into an opening round, after Taylor connected with a left hook to put Volante on the canvas for the first time in her career.

It would serve as the only knockdown of the contest, only because Volante who was very aggressive early fought with far more caution after the knockdown. Taylor did her best to force an action fight but settled for winning rounds in one sided fashion.

Taylor moves on to 13-0, 6 KO’s with the win, collecting her third title at lightweight (IBF, WBA, WBO) and now with her sights firmly set on becoming undisputed champion. Her win comes one week after Belgium’s Delfine Persoon (43-1, 18KOs) defended her WBC lightweight title in a 7th round knockout of Melissa St. Vil.

Scores were 95-91 (twice) and 95-93 in favor of Sulecki, who twice dropped Rosado but was down himself in round nine.

The Los Mochis native had never been dropped or stopped prior to Friday; Campbell would make that change from round four, working the body and connecting upstairs with a counter right hook, prompting Yung to touch his glove to the canvas.

Campbell closed the show one round later. Solid Body shots again, a straight left hand upstairs rocking Yung and a flurry of punches with no answer from Yung forcing the referee to intervene and stop the contest.

The official time was 1:37 of round five.