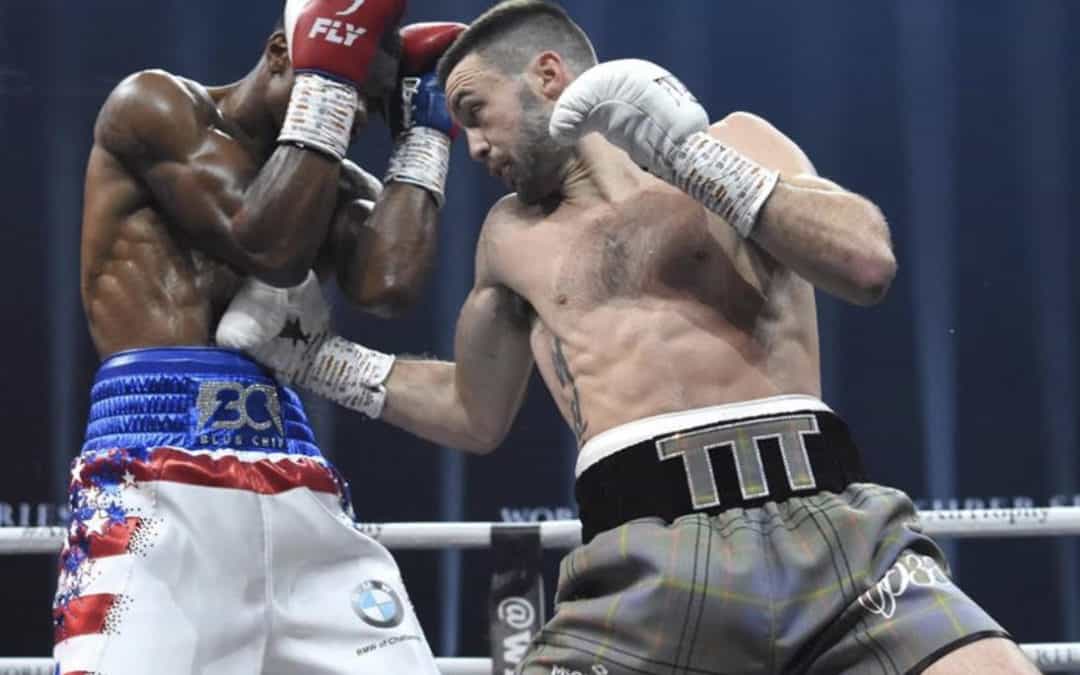 The World Boxing Super Series Quarter-Finals arrived in Glasgow, Scotland Saturday night. The venue was the SSE Hydro Arena. The weight class this time was super-lightweight, the event was broadcast free to the UK via the WBSS media platforms and also via IFL TV and in America DAZN had it covered.

The main event seen the Tartan Tornado Scotlands Josh Taylor (14-0, 12 KOs) take on the unbeaten American Ryan “Blue Chip” Martin (22-1, 12 KOs) it was a fight of the undefeated.

Taylor dominated Martin in this scheduled 12-round contest. The fight came to an end when once Taylor landed an apparent illegal left hand to the back of Martin’s head in the seventh round Saturday night, a shot which sent Martin into the ropes and eventually to the canvas.

Referee Victor Loughlin quickly jumped in (possibly prematurely) to wave a halt to the action despite Martin complaining about Taylor hitting him on the back of his head. The stoppage was recorded at 2:21 of the seventh round.

Prior to the stoppage, this was a one-sided affair for most of the fight, Taylor looked very polished and controlled the fight all evening. Martin could not match Taylor for timing nor punch ratio.

Scotland’s Taylor, the No. 2 seed in the World Boxing Super Series, improved to 14-0 and recorded his 12th knockout against the previously unbeaten Martin.

Taylor had added in the build-up to this fight…”Every fight is a risk,”

“I see it as an opportunity to become world champion sooner than I thought.”

In front of around 6,000 spectators, Martin provided an unknown test to the home favourite before he was deservedly beaten.

As the early rounds got underway a series of body blows and uppercuts were landed on the American, who barely flinched as the punches came one way, Taylor was also approaching with caution.

Martin hit Taylor with a straight right hand just after the midway mark of the third round and would walk Taylor down whilst throwing some combinations.

Martin was more aggressive early in the fourth round, but Taylor slowed him down again with a perfectly timed body attack.

Martin tried trading with Taylor from the inside over rounds five and six. He didn’t have much success, as Taylor kept touching Martin to the body and would then look for the opening on Martins’ chin, it was apparent Taylor was beginning to pull away in this fight and Martin was struggling to match the Scotsman’s work rate.

A cut opened over Martin’s right eye in the seventh round and his left was swollen to as Taylor picked him apart with punishing punches to the body and head prior to ultimately ending the fight in this round.

Defending WBA “super” world bantamweight champion Ryan Burnett, unfortunately, suffered a fight-ending back injury during the fourth round of what had been a highly competitive 118-pound contest.

Burnett couldn’t make the bell to start the fifth round despite his desire to continue and Donaire was declared a technical-knockout winner.

Elsewhere on the card…

Paul Butler the former IBF bantamweight world champion had been out of the ring since losing to Emmanuel Rodriguez back in May.

Butler, however, advanced to the reserve position for the semi-finals of the World Boxing Super Series with a ten round points victory over Yoan Boyeaux.

Meanwhile, in the reserve bout at super-lightweight, Viktor Postol was taken the distance by MTK Global fighter Siar Ozgul. 99 points to 91.

Stephen Tiffney defeated Arturo Lopez, despite getting dropped, in a six-round contest, the judges scored it by 58 points to 55.

A great production by the world boxing super series team, a card with good match up’s a British title fight and two massive co and main events, value for money and throw in the free stream coverage online, you can only appreciate this being good for the sport.

Next up for the WBSS team,  Chicago November 10th.